Lekela, the renewable power company that delivers utility-scale projects across Africa, today announces that it has signed a power purchase agreement (PPA) with the Egyptian Electricity Transmission Company (EETC) for its 250MW wind farm project in the Gulf of Suez, near Ras Ghareb. 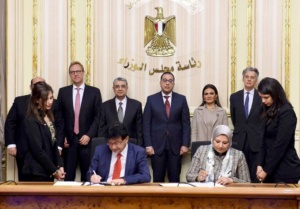 Located 30 kilometres north-west of Ras Ghareb, the project is part of the Government’s Build, Own, Operate (BOO) scheme. Once constructed, it will increase Egypt’s wind energy capacity by 18%. The project will produce more than 1000GWh a year, powering the equivalent of over 350,000 homes in Egypt. The wind farm will join Lekela’s other projects in South Africa, Senegal and Ghana that form its current 1,300MW portfolio, making it one of the leading Pan-African renewable power players.

The total investment for the project is estimated at US$325m and leading Development Finance Institutions have been mandated to provide financing. The Network Connection Agreement with EETC has been signed. The project will be constructed on a turnkey EPC basis and an announcement regarding the EPC contractor will be made at a later date.

Chris Antonopoulos, Chief Executive Officer at Lekela commented: “Egypt has a target of achieving 20% renewable power in its overall energy mix by 2022. Today’s agreement is a major milestone for delivering a 250MW wind farm to help achieve that goal. We would like to thank the Minister of Electricity and Renewable Energy, EETC, The Egyptian Electricity Holding Company (EEHC), Egypt's New and Renewable Energy Authority (NREA), the Minister of Investment and all those people, both in Egypt and beyond the country, who have helped us get to this point.

Across Africa we are starting to see the positive impact renewable energy can have on communities and on enterprise. Egypt is a key part of our strategy to develop 1,300MW of clean energy across Africa which will drive economic and social prosperity for its communities.”

A long-term owner-operator, Lekela has a growing team in Egypt who will be responsible for taking this project, as well as other future ones in the country, through late stage development, construction and into operation.

As with all of Lekela’s projects, the company is committed to creating shared value with local communities. The company will develop a Community Investment Plan, which focuses on enterprise, education and the environment initiatives that will last for generations. The project will include creating employment opportunities locally as well as address the socio-economic development opportunities in the area.

Faisal Eissa, General Manager, Egypt, Lekela commented: “We are excited to progress this project with the signing of the PPA. Egypt has favourable conditions to produce renewable energy and it is great to see that the government has ambitions to bring more clean energy onto the grid. Further, we look forward to working with the local community to develop a Community Investment Plan that will leave an impact that lasts even longer than the wind farm itself.”