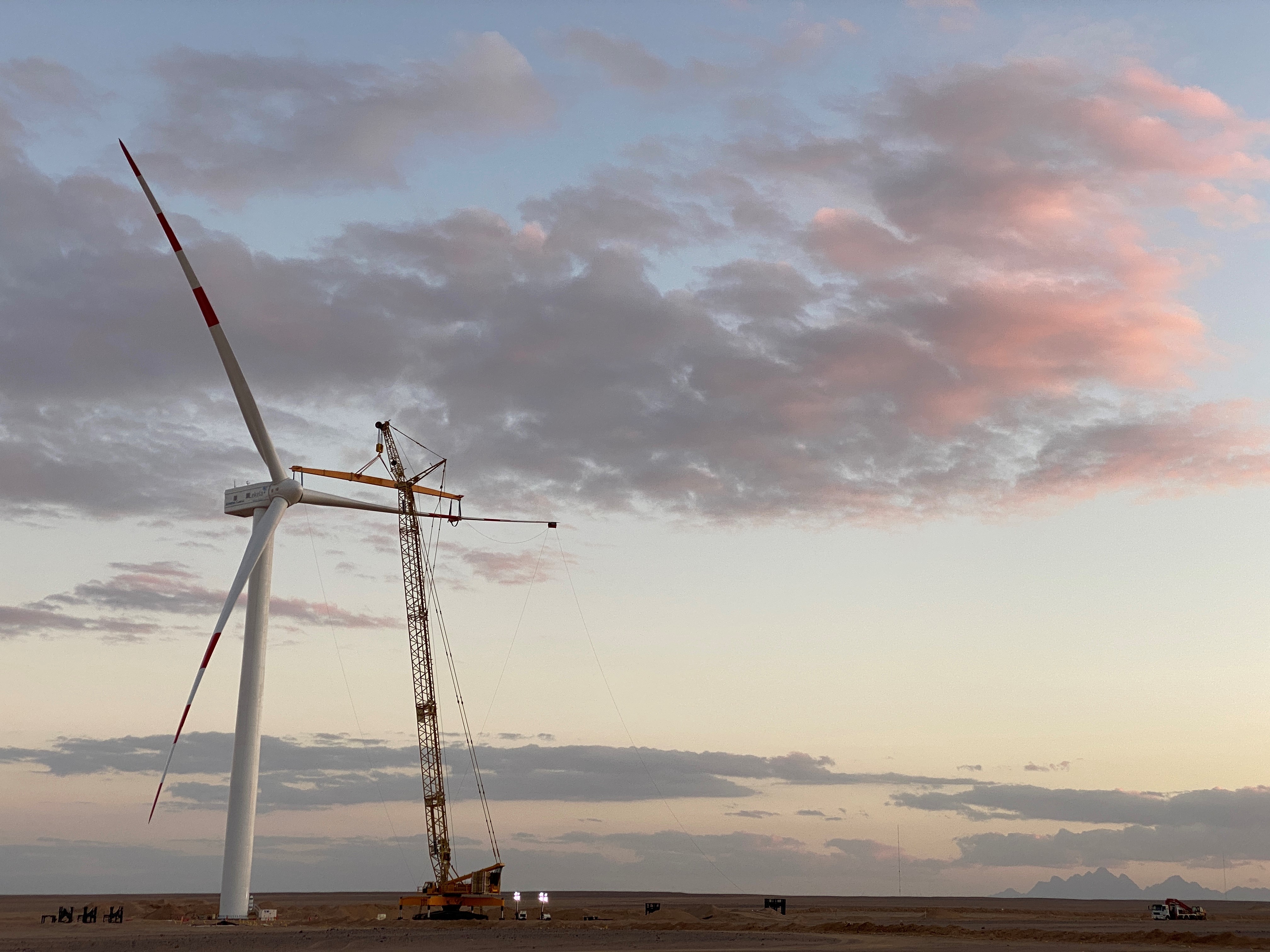 The installation marks an important step for the project, which began construction in February. In total, 96 turbines will be installed by Siemens Gamesa, with the wind farm set to become operational in 2021.

Located 30 kilometres north-west of Ras Ghareb, West Bakr Wind is part of the Government’s Build, Own, Operate (BOO) scheme. It will provide an additional 250 MW of clean energy to the grid as the country strives to meet its target of generating 20% of its electricity from renewable sources by 2022. The project will also prevent more than 550,000 tonnes of carbon dioxide emissions per year.

Despite the challenges presented by Covid-19, construction has continued in recent months and is on track with our commitments to EETC and to reach its Commercial Operation Date by end of 2021. During this time, the overarching priority has been to support the health and safety of all employees, contractors and partners involved in the construction. In line with its strategy to support the local communities where it operates, Lekela has also donated 4,400 packages of preventative supplies including face masks and hand sanitizer to residents of Ras Ghareb.

Chris Antonopoulos, Chief Executive Officer at Lekela said, “Seeing the first turbine go up is an exciting moment on any wind farm. Given this is our first project in Egypt, it adds to the sense of pride about the progress we’ve been making. Coming so quickly after reaching milestones in both South Africa and Senegal, this is another sign of our ability to deliver clean, competitively priced power right across the African continent.”

Faisal Eissa, General Manager, Egypt at Lekela added, “This is the end of the beginning in many ways. With the first turbine installed and the foundations for many more in place, we can look forward to swift progress over the next few months. Egypt has a clear goal for renewable energy and our first turbine going up is another strong sign of progress towards this target.”

“It’s only right at this moment that we thank all those involved in the construction programme, especially during the past few months where Covid-19 has presented new challenges to overcome. We’re proud – and grateful – to be on track with our commitments to EETC despite these and look forward to reaching Commercial Operation Date.”

Since the beginning of the construction phase, and as part of its commitment to creating shared value with local communities, Lekela has also launched a Women's Literacy Program in Ras Ghareb. The first phase of the program launched in September 2020 over a two-week session including 21 women. Financed by Lekela, the program will implement in several phases; and is managed in collaboration with the Egyptian Ministry of Education, the Egyptian Ministry of Social Security, and the Ras Ghareb Local Council.

Ayman Saad, General Manager of Siemens Gamesa Renewable Energies in Egypt, said: "We are proud to be associated with the support of renewable energy development plans in Egypt by delivering optimum clean energy projects. Today we celebrate the arrival and installation of our first blades at the 250MW West Bakr wind project. The wind turbine blades will be mounted on a total of 96 SG 2.6-114 turbine units. Once completed and connected to the grid, the 250MW West Bakr wind farm will increase Egypt’s wind power capacity ensuring a long term and lasting impact for sustainable development in the country".

The progress at West Bakr follows several other significant milestones for Lekela in recent weeks. In September, the company was awarded a grant by the U.S. Trade and Development Agency to fund a feasibility study in partnership with Senelec for Senegal’s first grid-scale battery storage system.

Meanwhile in South Africa, Lekela recently announced that its 140MW Kangnas and 110MW Perdekraal East wind farms in South Africa have successfully reached commercial operations. In total, Lekela now has over 1,000MW in operation and construction across Africa.